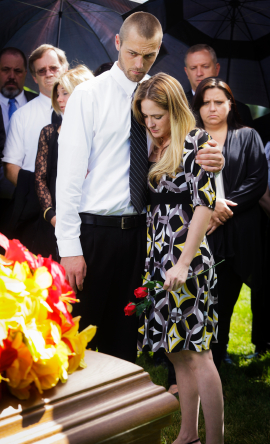 Sadly this is a true story that happened to me before I became an agent.

About 17 years ago, my grandmother passed away and I inherited the family house in Montrose, Alabama. At the time, I lived in Memphis, Tennessee so I didn’t know too many of my grandmother’s friends in the Fairhope, Alabama area. So, during the visitation, the day before the funeral, people were coming up to me introducing themselves all day long. During the visitation, I noticed one individual who was purposefully hanging back. Apparently, he was waiting for the crowd to pass so he could catch me by myself. A few minutes later, the crowd around me thinned and I found myself alone. Here he comes, without hesitation or missing a beat. He starts off with a few sentences of small talk, but I sensed that this conversation was starting to steer in another direction. However, I was alarmingly unprepared for the direction it was going. Apparently this guy was a real estate agent and he was starting to give me his pitch on why I should let him sell my newly inherited family estate. Forget the fact that his timing was pathetic, but he was pitching me while we were standing next to my dead grandmother’s open casket. Talk about sleezy. We haven’t even buried dear departed Grannie yet and he’s already trying to get me to sell, even before the will has been officially read. He sensed I was hesitant to want to talk about it so he started pitching even harder, going in for the kill. I guess he was prepared to whip out a listing agreement and have me sign it on top of my dead grandmother’s casket. Apparently my body language must have been shouting all sorts of profanities because my girlfriend came over to investigate what was going on. She could tell something was up. I tried nicely to convey to the agent that this wasn’t the time nor the place, but he wasn’t letting up. I finally said as sarcastically as I could, “Don’t you think we should bury the old girl first before we go and sell off all her stuff?” Then I just walked away in disgust. I think he took that as a “no” because I never heard from him again. But he did give me his business card.

Tip to all real estate agents out, funerals and visitations are not the place to make a listing presentation.